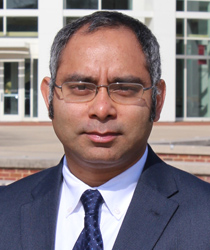 Datta and his research group study the aeromechanics of advanced vertical lift aircraft. The major areas of research are: electric-VTOL (eVTOL), high-speed tiltrotors, scalable-3D structures, and Mars helicopters. Before joining Maryland, Datta was at the U.S. Army Aviation Development Directorate at NASA Ames Research Center for 9 years. At Ames, he worked on the full-scale wind-tunnel testing of the UH-60A Black Hawk rotor, development of a scalable-3D aeroelastic solver - X3D, design of eVTOL aircraft, and aeromechanics of the JPL Mars Helicopter (Ingenuity). During 2008-2013, he served as the structural dynamics lead of DOD's CREATE-AV software: Helios --- a high-fidelity HPC tool for the design and analysis of future vertical lift aircraft. Datta is the founding Chair of the eVTOL Technical Committee of the Vertical Flight Society (VFS) (formerly the American Helicopter Society (AHS)) and a founding member and technical advisor to the VFS Hydrogen Council. He served/serves as a member of the VFS Dynamics Committee (2009-2012, 2016-2019),  US Army's Vertical Lift Research Center of Excellence review committee (2012-2015), Chair of NASA Aeronautics Research Institute (NARI)'s working group-2 on commercial intra-city Urban Air Mobility (2017-2018), AIAA Structural Dynamics Committee (2012-present), as Chair of its Conferences Sub-committee (2016-2022) and Vice-Chair of the Committee (2022-), and as Associate Editor of the Journal of the American Helicopter Society (2009-present).

UH-60 Wind-Tunnel Airloads Test Team: US Army, US Air Force, NASA, and The National Full-Scale Aerodynamics Complex(NFAC). "For successfully completing the most intricate and extensive testing ever performed on a full-scale rotor system."


Conference Papers too large for Journals:

UMD aerospace engineers contributed significantly to the design of the history-making rotorcraft.

2020 graduates recognized for their outstanding, service, and leadership.

Could lightweight electric vertical takeoff and landing aircraft be a solution for urban congestion?