It might be tiny, but Peter Ryseck’s Mini QBIT offers hobbyists some serious fun—and could help foster new innovations in the field of unmanned aviation.

An aerospace engineering master’s student mentored by Inderjit Chopra, Ryseck based the design of his VTOL aircraft on research conducted at the University of Maryland’s (UMD) Alfred Gessow Rotorcraft Center. The idea is ingeniously simple: take a quadrotor and mount a pair of wings just below the motors, using magnets to keep them—and a nosecone—in place (in the event of a crash, the magnets simply pop off, minimizing damage). 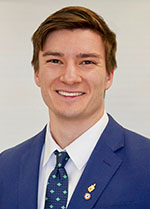 The result is an aircraft that fits in the palm of a hand and boasts enhanced flight time, distance, and endurance.

“It’s a quadcopter with a set of biplane wings,” he said, “Not only can it achieve significantly greater flight time compared to a standard quadcopter, but it combines the flight characteristics of a rotorcraft and an airplane.”

“That makes it both challenging and fun to fly,” he said.

While the concept is a boon to hobbyists, it could also be used in commercial or humanitarian endeavors, such as organ delivery or search-and-rescue. But more research and experimentation is needed to unlock its full potential—and that’s where Ryseck sees a key role for the hobbyist community. With the aim of spurring experimentation, he has made his design available to the public and has also set up a website where parts and components can be purchased so that others may build their own.

“A lab like the Gessow Center has a limited number of people,” he said. “But the RC and small aircraft communities are huge by comparison. Getting more people involved in experimenting with quadrotor-biplanes can really accelerate the development process.”

The Mini QBIT has already drawn significant media attention, including a writeup Hackaday, and a YouTube review by Joshua Bardwell. “It’s inherently cool—I don’t even need to explain to people why,” Ryseck said. “People take one look at it and they see right away what makes this so appealing.”

For more information on the Mini QBIT, visit www.miniqbit.com.