The University of Maryland- Both undergraduate and graduate teams from the Department of Aerospace Engineering competed in the 36th Annual Student Design Competition for the Vertical Flight Society (VFS) and won top honors for their designs of a Vertical Takeoff and Landing Aircraft on August 21st. Both teams also won the optional bonus weight optimization category that accompanied the main competition.

The competition tasked the teams with creating a design of a rotorcraft that was capable of performing emergency medical services up to the highest altitudes in the world. The challenges that rotorcrafts and crews face while completing these rescue missions include freezing temperatures, thin air and extreme weather conditions that lead to a degraded visual environment. Both teams addressed these challenges with different design modifications.

The Graduate team, led by team captain, Seyhan Gul a Graduate Student at UMD, created the design Caladrius. The design is a single main rotor helicopter with a large tail rotor, which allows the helicopter to excel in high wind speeds and weather conditions that would be experienced during a rescue mission. Furthermore, due to diminished lift capabilities at high altitudes, Gul said the engine is capable of performing at a much higher level compared to normal rescue helicopters.

Two representatives for the team also have been invited to the VFS 76th Annual Forum & Technology Display in Montreal, Canada in May of 2020 to present their design. Gul said that the entire team will be in attendance for the forum. Gul will also be displaying the team’s design at 8th Annual Asian/Australian Rotorcraft Forum in Ankara, Turkey in November of this year.

Gul said of the competition, “It is taken very seriously in the department, and for four months, we worked day and night to create a design that everyone could be proud of. Going into the competition, we knew that our design was capable of winning, but there were many quality teams in the competition and we gained a sense of relief after receiving notice of our victory.” Gul said of the bonus weight category, “Although it was optional, for us, nothing is optional.”
The most difficult part of the helicopter to design for the team were the blades, because they need to be able to perform properly in the most extreme conditions. Gul said the team tried and tested more than 1,000 designs until they created one that they believed could do the job.

The undergraduate team was a collaborative effort between The University of Maryland and Universidad de Carlos III (Spain), which was supervised by faculty members, Dr. V.T. Nagaraj and Dr. James Baeder.

The design was their senior capstone project, and the team worked tirelessly from August 2018 to May of 2019 to complete the design. Their design, “TAHR,” named after the Himalayan Mountain Goat, features a real-time video feed of the cable hoist that allows the pilot to keep their eyes on the gauges while still being aware of any personnel that are being raised or lowered during the rescue mission.
Before designing the cockpit, team captain Ben Dobson said, the team met with active rescue pilots to gain their perspective on the most strategic place to put windows, while managing to not “compromise the integrity of the rotorcraft.”

Finally, an enhanced cruising speed of 160 knots separates TAHR from the rest of the pack. According to Dobson, the widely used search and rescue helicopter Airbus H145, cruises at an average of 133 knots. TAHR has the capability to successfully complete any high altitude search and rescue mission.

AGRC is a Vertical Lift Research Center of Excellence 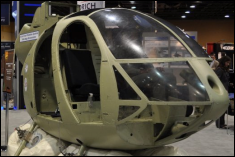