For 33 years, the Sikorsky Prize may have been one of the most elusive goals in aviation.

The international Igor I. Sikorsky Human-Powered Helicopter Competition, established in 1980, was specifically designed to energize students and other innovators by providing a hands-on, galvanizing experience for the next generations of vertical flight engineers and scientists.

The goal: build the first human-powered helicopter to meet a set of extremely challenging flight requirements.

The Sikorsky Competition was often described by experts as impossible, until shortly before it was claimed in July 2013. This formidable task compelled both young and experienced students of science alike to explore uncultivated regions of physics and design. It drove them to invent machines that were impossibly large, and impossibly light. And ultimately, these challengers proved that the impossible was possible.

The Clark School’s Gamera Project is a student design challenge inspired by the Sikorsky Prize. The Gamera human-powered helicopter team broke new ground in altitude and duration in a series of flights conducted June 24–26, 2013. Their flight highlights included:

The altitude of 10.8 feet marks the highest that the Gamera helicopter has ever flown.

The Gamera team powered the Clark School to a new world record of 97 seconds in flight duration. This flight took place September 25, 2013.

Watch the throwback video above to learn more. 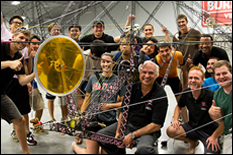