Brandon Hall, an aerospace engineering senior and Clark School ambassador, has received this year's NASA Academy Research Award at Goddard Space Flight Center, which goes to a project that made a significant contribution to GSFC research.

The project, "A Dust Mitigation Vehicle" is a prototype paving system for the Moon that utilizes only resources available in-situ. Hall has been working with Goddard engineer Dr. Eric Cardiff for over a year developing and testing the prototype vehicle.

Lunar dust contamination is one of the paramount problems that need to be addressed before NASA returns to the surface of the Moon. One way to reduce the problem is to remove the source of the dust by paving the surface. Cardiff and Hall's dust mitigation vehicle uses only the native solar flux present in-situ in order to create a hard, dust-free surface for lunar operations. This project was in conjunction with Hall's participation in the NASA Academy, a program that represents an immersive and integrated multidisciplinary exposure and training for students with career aspirations of critical importance to the national aerospace program.

Hall and Cardiff will be presenting their research in Cape Canaveral, Fla., this October for the annual meetings of the Lunar Exploration Analysis Group, the International Lunar Conference 2008, the Conference on Exploration and Utilization of the Moon, and the Space Resources Roundtable. 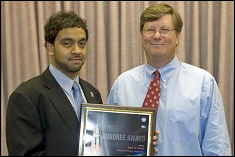 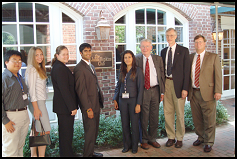