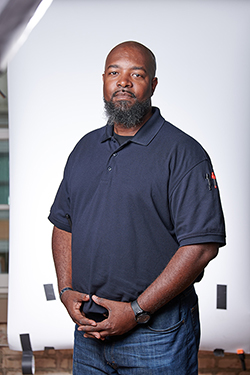 In 2015, Ronney Miller was assessing his options.

For the past seven years, he’d been part of the U.S. operation in Afghanistan, serving as a combat drone mission operator, chief UAS pilot, and attachment instructor pilot. But the U.S. presence was winding down. “I needed to find another position where I could perform my duties,” Miller said.

Back in the United States, a fledgling initative at the University of Maryland (UMD) was beginning to spread its wings. Founded the year before, the UMD UAS Test Site had set up its operations at the St. Mary’s County Regional Airport in Southern Maryland, with the goal of advancing UAS technology and applications while also buoying the regional economy.

It was the right match, with Miller bringing the skills and experience he gained through his years as a deployee, and UMD offering the chance to help stand up an important new project, almost from scratch.

“I was involved in a number of firsts,” said Miller, who would serve as the Test Site’s chief pilot for close to a year. Among them: a New Jersey demo held in front of FAA officials that marked the first time drones were flown alongside manned aircraft. 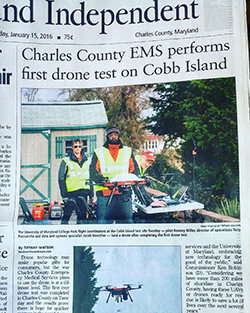 He also spearheaded the Test Site’s acquisition of Tiger Shark drones retired by the U.S. Navy. These fixed-wing drones would become an integral part of Test Site operations for years to come. Miller knew their capabilities very well: he had flown them often during his service in Afghanistan.

In addition to helping to develop the Test Site’s systems and assisting with the design of its hangar, Miller also made an important contribution to education and outreach, planning drone demos that could be attended safely by children with a variety of special needs.

“A lot of people don’t understand that a drone demo can present issues for these kids,” Miller observed. “They’ll say ‘it’s drones, they’re kids, they’re going to love it’. But it’s not always that simple.”

Working with the organizers of outreach events aimed at special needs kids, Miller developed best practices that can be used to make the experience safe for them.

“By dimming some of the lights, maybe putting tape over the indicators, we can accommodate kids who are triggered by the blinking,” he said. “When flying a drone indoors, I don’t need to see the indicator lights, I just need to see the aircraft. With pitch sensitive kids, we give them particular kinds of earphones. There are also kids who can become aggressive, so we want to make sure those kids are kept within a particular safety realm that will limit their aggressiveness if somethning triggers them.”

His awareness of the need stems from his family: Miller is parent to two children who are on the special needs spectrum, including one with pitch sensitivity. “Although he’s grown to adjust, I’m aware of the sound issue because of him,” he said. “It motivated me to go the extra mile for children with a similar sensitivity who might be attending our events.”

From UMD to the FAA

Though Miller’s stint with the Test Site was brief, it had considerable impact. He was there during its formative years, and helped develop many of its current procedures. The experience he gained at UMD supplemented his existing skill set and prepared him for his current role as a SAIC contractor supporting the FAA's AUS branch as a UAS analyst.

His knowledge of drone operations, policies, and best practices is exhaustive—and that’s a good thing, because part of an aviation analyst’s job is to field an impressive variety of questions posed to the agency by pilots, drone operators, and hobbyists.

Some want to know how to operate a particular system or configuration, or what rules and regulations apply to their endeavor. Some have questions about certification. Others flag privacy concerns: “what can do if someone is using a drone to spy on me? How do I stop it?”

Notes Miller: “Because of the experience I have, including from working at UMD, and a previous 8 years overseas, I’m able to field these types of questions.”

It’s been quite a journey—and one that he views with gratitude. “I’ve learned a lot along the way, and had fun doing so,” he said. “It’s definitely mind-blowing to see where I am now.”