Next time you look to the sky, see if you can spot "9319 Hartzell," the main belt asteroid named after the Department of Aerospace Engineering's Assistant Professor Christine Hartzell. The International Astronomical Union (IAU) announced the asteroid naming, and IAU selects new names only every few years.

Having your name attached to an asteroid is no easy feat as the process can take years, and final names are judged by the fifteen-person Committee for Small-Body Nomenclature of the International Astronomical Union, comprised of professional astronomers (with research interests connected with minor planets and/or comets) from around the world.

"I think it's every scientist's dream to have something named after them," said Hartzell. "Having an asteroid named after me is really exciting because it means that my research is valued by the planetary science community."

It is a fitting honor for Hartzell. Her research focuses on the electrostatic and cohesion properties of dust on the surface of asteroids such as how the particles interact with one another and in relation to asteroid's surface. Understanding dust particle motion on asteroids can improve not only the understanding of their evolution, but it can help improve the design of future space craft used for exploring these unique environments.

S. J. Bus originally discovered asteroid 9319 Hartzell in 1988 at the Cerro Tololo Inter-American Observatory, an observatory located in the northern region of Chile. The Hartzell asteroid–which is approximately two-kilometers in size—is part of the main asteroid belt located between the orbits of planets Mars and Jupiter.

For more information on Hartzell and her research, visit her website. 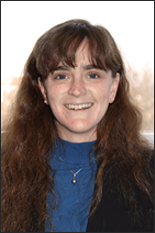