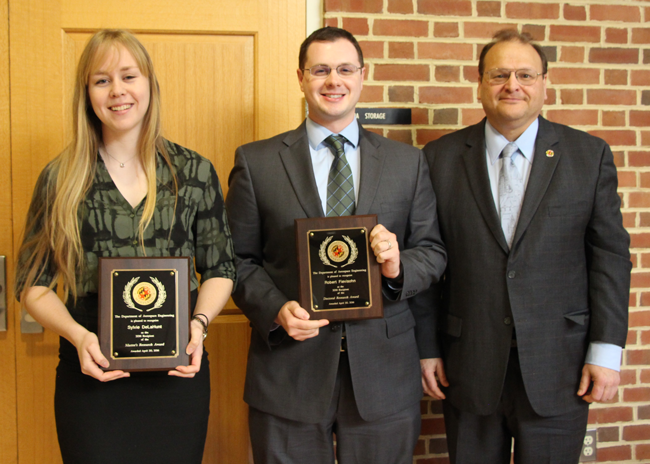 In the Dean’s competition, Fievisohn won third place for his paper “Steady-State Analysis of Rotating Detonation Engine Flowfields with the Method of Characteristic.” Fievisohn joined the department in 2013 as an advisee of Dr. Ken Yu. He received his undergraduate degree at Clarkson University in upstate New York in 2008 with a dual degree in Aeronautical Engineering and Applied Mathematics and Statistics.

DeLaHunt is a founding member of UMD's Women in Aeronautics and Astronautics (WIAA), an organization created to foster community by offering opportunities for networking, professional and technical development and outreach to help attract and retain more women in aerospace engineering. In addition, she has published an op-ed in the Baltimore Sun on "Encouraging Female Engineers” and received an honorable mention in The American Society for Engineering Education's (ASEE) Year of Action on Diversity Student Essay Contest. She was selected as one of “Tomorrow's Engineering Leaders: The 20 Twenties" by Penton's Aviation Week Network.