A University of Maryland (UMD) team, UMDLoop, won the Performance and Operations Award and placed in the top five for overall pod design at this weekend's SpaceX Hyperloop Pod Competition held in Hawthorne, Calif. The competition, which has been ongoing for more than a year, aims to advance the Hyperloop concept for a new form of transportation in which passenger-carrying pods travel between cities through above-ground tubes at very high speeds.

During the three-day event, 27 teams from around the globe pitted pod against pod to see which teams would have a chance to test their creation in SpaceX's vacuum-sealed one-mile test track adjacent to its headquarters. As part of the competition, teams underwent rigorous safety inspections and testing that evaluated all aspects of the pod's design from structural and functional to mechanical and navigation. In addition, each team had the opportunity for an open-air run, where they operated their pod on the test track without vacuum pressure.

"This has been a remarkable experience for our students, staff and advisors," said Darryll Pines, Dean and Nariman Farvardin Professor of Aerospace Engineering at the A. James Clark School of Engineering. "UMD Loop competed well, and it has been a great partnership between two UMD colleges. We are extremely proud of the UMD Loop Team who strongly represented the University of Maryland."

It's been over a year since the UMD team competed in SpaceX's Design Weekend and was selected as one of 30 teams—out of more than 100—to move forward in the next phase of competition: taking the team’s pod design from paper to reality. During that time, the team—which includes more than 60 students from UMD's A. James Clark School of Engineering; College of Computer, Mathematical, and Natural Sciences; Smith Business School; Department of Communication and Department of Art—devoted itself to the possibilities of Hyperloop travel and built one of the first pods of its kind.

"I'm blown away by our team's performance this week. We truly earned our spot as a top team in this competition," said Kyle Kaplan, aerospace engineering senior and team captain. "At the end of the day, I could not be more proud of our team and how well we worked together to succeed. Even though I wish we were given the opportunity to push the limits of our pod, I was extremely impressed by how we performed! Top five in the world, that's nothing to be disappointed about."

The Delft Hyperloop team, of Delft University in the Netherlands, got the highest overall score. Technical University of Munich, Germany secured the award for the fastest pod. MIT placed third overall in the competition, which was judged by SpaceX engineers. 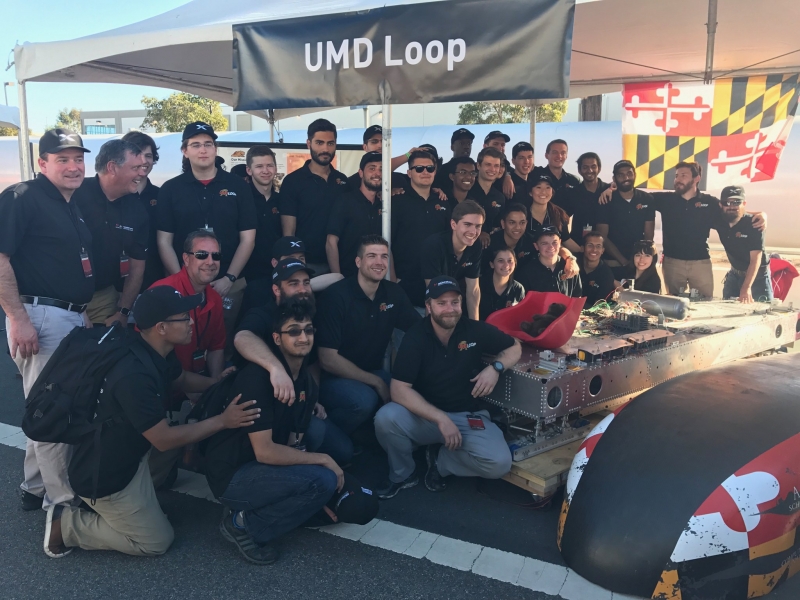 "The team has been a dream to work with," said chief faculty advisor Noah Ryder, a research associate and lecture in the Department of Fire Protection Engineering. "They have logged countless hours and made numerous sacrifices to be a part of making history, and their hard work has paid off."

Elon Musk, SpaceX founder and the originator of Hyperloop concept, spoke at this weekend’s competition and described the event as a way to encourage innovation in transport technology and get people excited about new forms of transport.

"It was fantastic to see so many different perspectives and people so passionate about working toward pushing the boundaries of transportation," said physics major and team project lead Erich Robinson-Tillenburg.

For computer science major and aerodynamics lead Paul Garvey, the competition was "hours upon hour of problem solving, and we loved every minute of it!"

Building on the enthusiasm and engineering achievements of this competition, SpaceX will host a second competition weekend during the summer of 2017. The UMD team plans to be there with a redesigned pod that has already been accepted for the competition.

"They are already gearing up to start all the analysis, building and testing that is needed to get race-ready again," said Ryder. "While some students will be graduating and won't be participating, we have recruited a new group of eager students to ensure that the program is able to thrive with the continued support of the university and our generous sponsors without whom we wouldn't have been able to bring our ideas to fruition."