To accomplish this, the researchers teamed up with graduate student Lauren Trollinger, who was preparing to test her custom-built and carefully balanced rotor blades as part of her research in trimming and tracking rotors at high advance ratios. Using Trollinger’s model rotor as a pilot test bed for PIV in the GLMWT, the team was able to acquire the first quantitative high-speed flow field measurements of reverse flow, or flow that travels backwards over the rotor blades.

The results have provided new insight into the unsteady flow structures that limit high-speed helicopter flight. The team plans to present their findings at the 43rd Annual European Rotorcraft Forum in September.

PIV involves using a pulsing laser and high-speed camera to obtain snapshots of the flow as it develops or interacts with an object.  The team set up their laser so that it illuminated the side of the rotor blade over which vortex structures developed and studied their development at different test points.

While Lind had studied the reverse flow phenomena using 2D models as part of his doctoral research at Maryland, this was the first opportunity investigate reverse flow on a 3D model using time-resolved PIV. 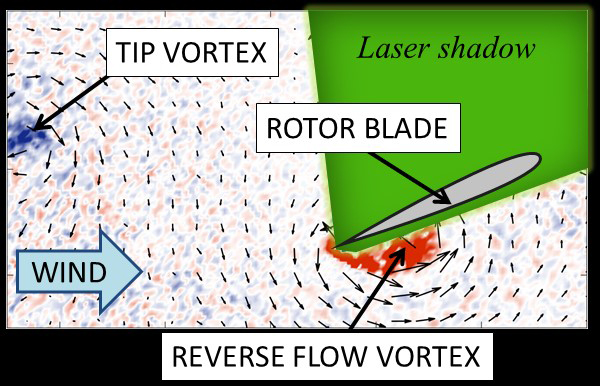 According to Jones, saving time is one of the biggest benefits of using time-resolved PIV in the GLMWT. Rather than measuring flow at just one, or a few points, on a model or test section, the time-resolved PIV technique could save engineers and developers a great deal of time during testing because they can collect more data across more points in a given aerodynamics test. In addition, researchers could make adjustments on the fly since they will be seeing the data in real time across multiple points, rather than a single plane.

PIV instrumentation is common in smaller wind tunnels, but the application of PIV in larger wind tunnels continues to be challenging, especially for time resolved measurements. If the team continues successfully demonstrating real-time PIV data collection in the GLMWT, the technique could offer researchers a more robust measurement technique for quickly quantifying the unsteady features in a flow field.

GLMWT Director Dr. Jewel Barlow said this test was the first flow-field measurements using PIV in the GLMWT. While there have been many tests that acquired quantitative flow field data using multi-hole probes and which provide maps of velocity vectors, vorticity, etc., this was the first example of time-resolved data.

To learn more about Jones and Lind’s research, visit the Separated and Transient Aerodynamics Laboratory website.