Congratulations to Ria Malhan (PhD) and Jeremy Knittel (MS) for their wins in the Department's 2013 Graduate Research Competition.

Malhan completed her B.E. in Aeronautical Engineering from Punjab Engineering College, Chandigarh (India) in August 2007. She joined the University of Maryland as a master of science student with adviser Dr. Inderjit Chopra. After finishing her M.S. in May 2009, she continued as a PhD student with Dr. Chopra and is working on Bio-inspired flapping wings. Her research involves experiments and CFD-CSD analysis to understand the aerodynamics of flapping wings with application towards Micro Air Vehicles. She will be graduating in May 2013. She also received the Kalpana Chawla Award in 2012 and won the Amelia Earhart Fellowship in 2010 and 2011.

The title of her presentation was "Investigation of Aeroelasticity of Flexible Flapping Wings for MAV Applications." A coupled CFD-CSD solver was used to simulate the aerodynamics of a flexible flapping wing MAV. The CFD solver is a compressible RANS (Reynolds Averaged Navier Stokes) solver. Multibody dynamics solver, MBDyn, was used as the structural solver with nonlinear shell elements, making it possible to analyze low aspect ratio wings with large deformations. The solvers were then coupled using python and validated against prior experiments and analysis on flexible wings. Systematic experiments were performed in-house on rigid as well as flexible flapping wings to fill this void and generate required aerodynamic force data and structural properties (for the flexible wings) and validate the solver. The comprehensive CFD-CSD coupled analysis developed in this work may serve as a design tool for deciding configurations and wing kinematics for next generation MAVs.

Knittel went to undergrad at UCLA, majoring in Aerospace Engineering and minoring in Political Science. He took a job at the NASA Dryden Flight Research Center following graduation, in their simulation group. For the two years Jeremy was at Dryden, he was responsible for simulation software development and operation for four different projects: Ikhana (a General Atomics Predator), F-16 Automatic Collision Avoidance Technology, Constellation Astronaut Training Facility, and Hypersonic Test Vehicle 2 (HTV2). He then began his post-graduate education at the University of Maryland, focusing on Hypersonics, under the tutelage of Drs. Mark Lewis and Kenneth Yu. His research, funded by a NASA Space Technology Research Fellowship, is in the area of vehicle and trajectory design for aero-assisted spacecraft missions.

The title of Knittel's presentation was "Multidisciplinary Optimization of Starbody Waverider Shapes for Lifting Aerocapture with Orbital Plane Change." His presentation covered the motivation and background of high-lift planetary entry spacecraft missions. He also outlined the methodology that he has used thus far in his graduate research. Finally, results were presented from a study of a combined aerocapture and aero-assisted plane change mission, highlighting the drastic efficiency of the manuever. 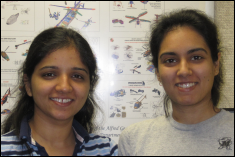