The graduate students of the Alfred Gessow Rotorcraft Center have been working steadily to make 2009 a flagship year for their lab. Saturday, February 21st saw AGRC students participating in Discover Engineering Family Day 2009, which took place in Washington, D.C. at the National Building Museum from 10-4pm; this concluded U.S. Engineers Week (EWeek) in the nation's capital. The great hall's colossal Corinthian columns were taken over by a record-setting 8,000 plus energetic children and intrepid parents, providing a wonderland of engineering fun. Dozens of hands-on activities were hosted by local engineering chapters and national organizations featuring bridge building competitions, drinking-straw rocket launching, robot demonstrations, and construction of energy absorbing structures to cushion marshmallows falling to the ground!

The graduate and undergraduate students from the University of Maryland 's Alfred Gessow Rotorcraft Center manned both the American Helicopter Society (AHS) International booth and American Institute of Aeronautics and Astronautics (AIAA) booth this year, teaching kids how to build and fly their own paper helicopters and encouraging them to experiment with their designs by adjusting the blade length and overall weight. With the aid of a subsonic wind tunnel, children learned how airfoils generate lift according to Bernoulli's principle and examined the creation of wing-tip vortices. The goal of the event is to expose young children, as well as their parents, to science and engineering and raise awareness of what engineers actually do. Prizes and souvenirs, supplied by AHS, AIAA, and NASA, were given out throughout the day and kids walked away with a greater appreciation for the wonders of flight.


Visit the AGRC website for more information about the lab: www.agrc.umd.edu 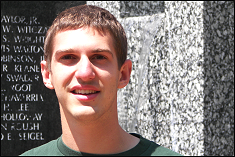