Created in February 2013 as a means of expanding the mission of the John Anderson Scholarship, the Aerospace Engineering Research Opportunity Scholars (AEROS) Program provides funding support for rising juniors and seniors (current sophomores and juniors) interested in spending the summer working closely with faculty on scholarly research projects.

LEARN MORE ABOUT THE PROGRAM 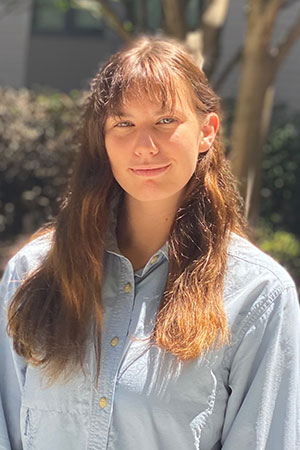 Eva Alexandrova is a rising aerospace engineering junior with a minor in Global Engineering Leadership. She works for Dr. Chopra’s and Dr. Nagaraj in Alfred Gessow Rotorcraft Center on Gamera-S Solar Helicopter research project. This summer in the online environment, she worked on searching for the best solar tile and comparing their efficiencies. The data and knowledge that she gets from this research will further help me to apply it to Gamera-S project to achieve our objectives and test the solar cells that we are going to be using. Alexandrova is a member of Women in Aeronautics and Astronautics society as well as a member of the UMD Varsity Tennis Team. Jared Allanigue 2020 AEROS Recipient Jared Allanigue is a rising sophomore studying Aerospace Engineering with a minor in Astronomy. In the fall semester, he worked as an undergraduate student researcher for an ENAE100 project with Dr. David Akin at the Neutral Buoyancy Research Facility, researching AprilTags applications for satellite servicing robots. He is also involved with the Composites sub team in Terps Racing, the Manufacturing sub team in Terp Rockets, and Dr. Paley’s Autonomous Micro-Air Vehicle (AMAV) Team. Outside of academics, he enjoys playing Smash with friends and rolling in Brazilian Jiu-Jitsu. This summer Jared will work virtually with Dr. Michael Otte on kilobot programming and observing emergent behaviors that arise when opposing kilobots are added to a swarm. 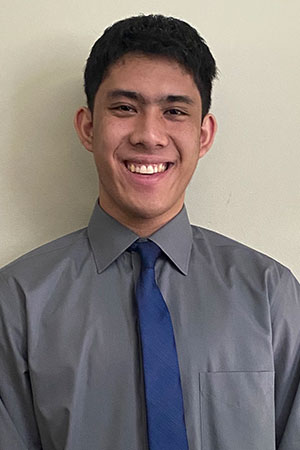 Jared Allanigue is a rising sophomore with a minor in Astronomy. In the fall semester, he worked as an undergraduate student researcher for an ENAE100 project with Dr. David Akin at the Neutral Buoyancy Research Facility, researching AprilTags applications for satellite servicing robots. He is also involved with the Composites subteam in Terps Racing, the Manufacturing subteam in Terp Rockets, and Dr. Paley’s Autonomous Micro-Air Vehicle (AMAV) Team. Outside of academics, he enjoys playing Smash with friends and rolling in Brazilian Jiu-Jitsu. This summer Jared will work virtually with Dr. Michael Otte on kilobot programming and observing emergent behaviors that arise when opposing kilobots are added to a swarm. 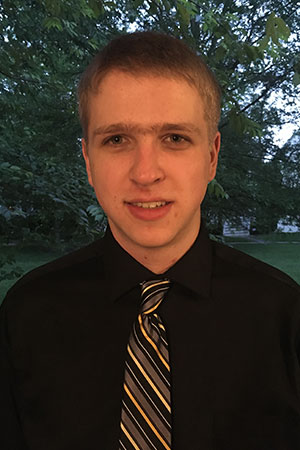 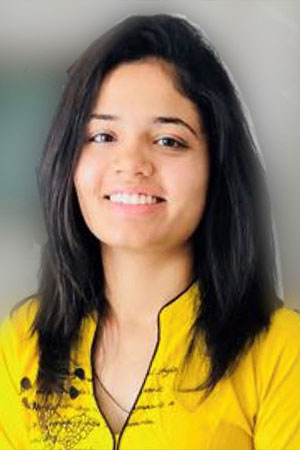 Sanya Doda is a rising junior planning to pursue the space track. She is currently a member of UMD’s Research Institute for Scholars in Education (RISE) program and working on developing an organization focusing on how aerospace engineers could use their skills to serve the society. During the semester, she worked under Dr. Mary Bowden in her Balloon Payload Program to build payloads like MARS which could release the payload below it in flight and LIVE, a payload whose overall goal is to create a low-cost reliable video streaming mechanism. This summer she continues to work for Dr. Mary Bowden to see how a robotic arm would function under unstable conditions such as a balloon flight. 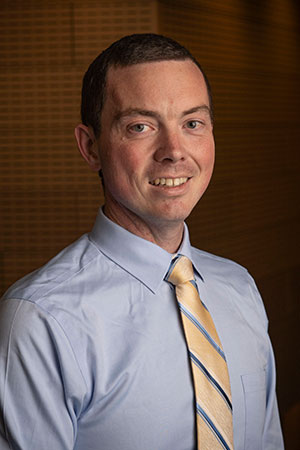 Kyle Guilday is a rising junior studying aerospace engineering and global engineering leadership. This summer he worked with Dr. David Akin in the Space Systems Laboratory. His research focuses on studying autonomous control strategies for robotics using Robot Operating System and Sensor Integration. Madelaine Lebetkin 2020 AEROS Recipient Madelaine Lebetkin is a rising sophomore studying aerospace engineering with a minor in professional writing. She works under Dr. Mary Bowden in the Balloon Payload Program, researching effective designs for a payload with a deployable solar panel called the Solar Launched Automatic Power System (SLAPS). She is the current secretary of UMD’s chapter of the American Institute of Aeronautics and Astronautics, as well as an Honors Ambassador, representing University Honors. Madelaine has worked in the Neutral Buoyancy Research Facility in an effort to construct a functioning crew seat for different levels of gravity. Madelaine is a member of Flexus, the women in engineering living and learning community as well as a flute player in university band. She has studied abroad in Munich and London, and hopes to study abroad again in the future. 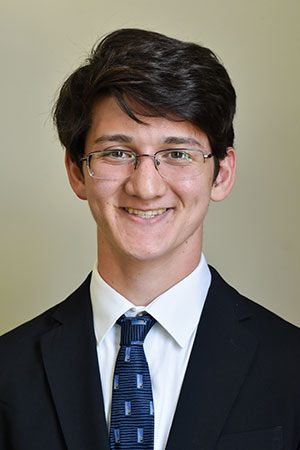 Liam McCue is a rising sophomore studying aerospace engineering. He serves as an undergraduate liaison for AIAA and is a member of University Honors. Liam's research this summer focused on building an autonomous electric scooter with Dr. Paley as a part of the RESUME (Research in Electric Scooter Urban Mobility) team working in the Collective Dynamics and Control Laboratory. By hacking an electric scooter, Liam hopes to have remote control to serve as the basis for the autonomous platform. He mainly focused on sensor fusion and integration to control the scooter. 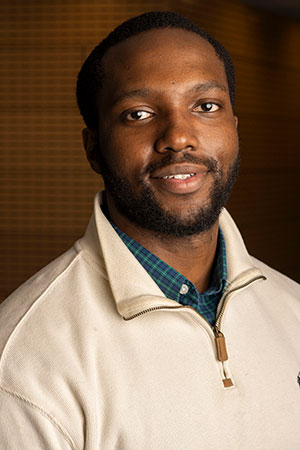 Azeza Odharo is a rising senior studying the aeronautical track. Azeza transferred into the University of Maryland last fall from Montgomery College. He was one of the undergraduate students selected to work with the seniors on the 2020 “Design/Build/Fly” capstone project. This summer, Azeza will be working with Dr. Christopher Cadou to model a counter flow heat exchanger in a numerical propulsion system simulation (NPSS) software used for 'standard' turbine engine simulation. Heat exchangers play a big role when it comes to compact and efficient methods for converting liquid hydrocarbon fuels into electric power for hybrid-electric propulsion. Azeza is looking forward to this research because of the learning experience that comes with it, and his high interest in aircraft propulsion systems. 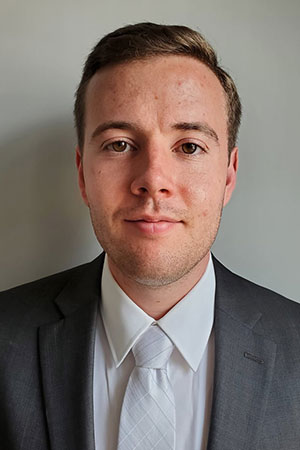 Tyler Parks is a rising junior in the aerospace engineering program. He served four years in the U.S. Air Force as an Air Weapons Controller, where he controlled aircraft for Air-to-Air Combat and Close Air Support. While deployed, Tyler controlled over 1,600 missions throughout more than 250K square miles of Afghanistan airspace. He was recently selected for the NASA Pathways Program and will begin working at NASA’s Johnson Space Center in the fall. This summer, Tyler worked for Dr. Flatau, using Computational Fluid Dynamics to analyze how active flow control devices can reduce pressure drag due to flow separation. He will also be working on a project with the Army Research Lab at Aberdeen Proving Grounds to model the effects of sand ingestion in gas turbine engines. Hridoy Rozario 2020 AEROS Recipient Hridoy Rozario is a rising senior in the aerospace engineering space track program. Last semester, he worked with a Ph.D. student on implementing a reinforcement machine-learning algorithm on a simulation. This summer, Hridoy will work on a simulation of a swarm of robots called the Kilobots with Dr. Michael Otte. He will research emergent behaviors of swarm and program the Kilobots to balance a beam. The program will then be tested in the simulation to test simulator accuracy and explore swarm intelligence and its application. 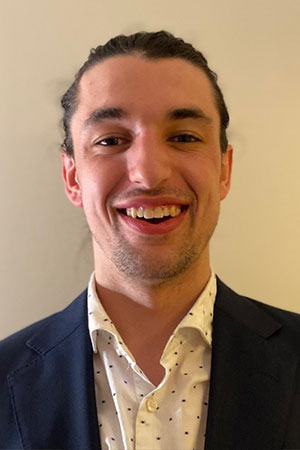 Edward Tocco is a rising senior aerospace engineering student. He is a member of the Terrapin Rockets club, where he worked on the Integration sub team designing a GUI for monitoring rocket flight parameters. He currently works in the Space Propulsion and Power Lab (SPPL) on the helicon thruster project. This summer, Edward worked with Dr. Sedwick at SPPL on designing and modeling a new thruster, focusing on the possible advantages of implementing a solid nozzle and its impacts on the ionization fraction. 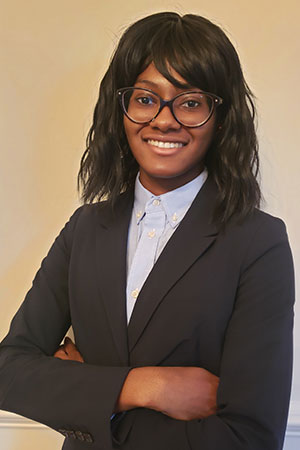 Alexis D. Williams is a rising junior studying aerospace engineering. She is the current Vice President of the Out in STEM (OSTEM) chapter at UMD and is a member of the Women in Engineering (WIE) advisory board at UMD. For half of her freshman year and her entire sophomore year, she conducted research under Dr. Flatau on improving the effectiveness of a magneto-elastic torque sensor. When she is not conducting research or studying for exams, she enjoys writing science fiction. This summer, her research under Dr. Flatau will focus on the design and characterization of 3-D printed magnetic sensors. She will be creating COMSOL models to determine if 3-D printed objects made from PLA doped with magnetic particles can be used to detect strain.