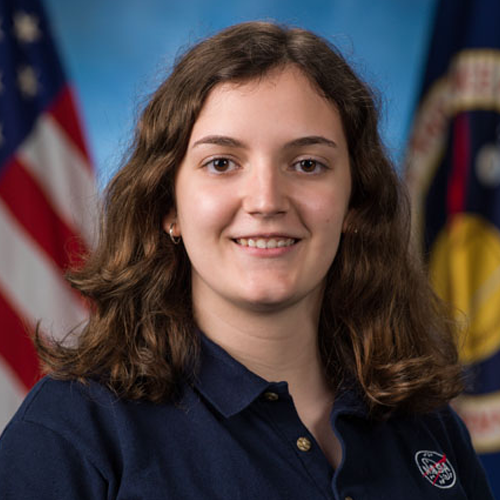 There are a lucky few people in the world who can say that they were able to achieve their lifelong dream. Senior Kate Melone is one of them. Melone found her way to the University of Maryland from her hometown of Wilmington, Delaware where she grew up dreaming of outer space. “I’ve been saying I wanted to be an astronaut since I was two years old,” she recalls. “Once I figured out what NASA was, it’s always been a dream of mine to work there.”

With a lot of hard work and family support, at the young age of 21 Melone has already begun living her dreams. This fall, she heads to Houston, Texas to complete a co-op with NASA at the Johnson Space Center in the Crew and Thermal Systems Division.

Melone’s selection for this opportunity has been years in the making. Her experience with space suit development dates back to 2013, her first year at Maryland. Melone didn’t squander a single moment on campus and as a first-year student, she started working right away in the Space Systems Lab where she was involved in designing and developing analog space suits.

“It was pretty cool,” she remembers. “We sent suits out to Hawaii for an analog mission called HI-SEAS.” With a full year of experience under her belt, Melone landed an internship in the summer of 2014 with NASA at the Johnson Space Center. There she worked on a project looking at extravehicular activity (EVA) glove injuries and co-authored a related report. Melone had both hands on her dream and she wasn’t letting go. She returned to NASA for another internship during the summer of 2015, and after an impressive second summer of designing and fabricating a cycle tester from start to finish, she was able to secure a co-op position.

In addition to Melone’s list of accolades, she was selected as an AEROS scholar with a John Anderson Scholarship. “It was an unexpected thing that was a really great opportunity for me.” For the past year, Melone has been working on glove design, looking at alternate pressure materials. The AEROS program and the Anderson Scholarship allowed her to continue doing research for a spacesuit power glove—work she was able to present to the department’s faculty during AEROS' 2016 Scholars Presentations. “We are looking at how to get a power glove to work inside a glove box using pneumatic artificial muscles (PAMS).”

While she was busy making waves in Texas at NASA, Melone’s absence was felt on campus. Beyond spending time on her research, she has served as a teaching fellow for ENAE283: Intro to Aerospace Systems with Dr. Mary Bowden. She also made time to reach the larger community by serving as a Clark School Ambassador, giving tours and interacting with prospective students and their families. Melone’s leadership skills were instrumental in the success of the department’s newest student organization, Women in Aeronautics and Astronautics (WIAA). Melone served on the executive board during WIAA’s inaugural year and hopes to resume her level of activity when she returns to campus next fall.

The secret to Melone’s success? Persistence. “Just follow your passion,” is the advice she gives. “If something doesn’t go your way the first time, that doesn’t mean it’s wrong. Persistence overcomes resistance. Keep pushing and you’ll get there.”